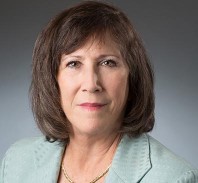 She became a stockbroker with Paine Webber after moving to Hawaii. She joined a team with Merrill Lynch as their designated financial planner, during which time she studied for and obtained her Certified Financial Planner Certificate. During this time she came to the attention of Merrill’s financial planning department in their corporate headquarters in Plainsboro, NJ. She transferred there and became the National Marketing Manager for several years before moving to the training facility as one of two national training managers for Merrill’s 15,000 financial advisors. Her final position with Merrill was with the Family Office Group, serving clients with a minimum net worth of $100 million.

She has extensive public speaking experience regarding personal finance. She has been an invited speaker for 4 governors – Governor Waihee in Hawaii, Governor Pete Wilson in California, Governor Christine Whitman in New Jersey, and Governor Ed Rendell in Pennsylvania. She has been quoted in various publications including Hawaii Investor and Redbook. She was a guest speaker on Financial Independence for Merrill and on Financial Speaking WVED radio in New York.

Barbara is an avid tennis player and loves to travel. She is a volunteer for Meals on Wheels, the Office of the Ombudsman for the Institutionalized Elderly and The Guardianship Monitoring Program.